AUDIOVISUAL TECHNICIANS ARE THE SMARTEST GUYS IN THE ROOM

After assisting a young and pretty, but very green, meeting planner through a series of logistical issues she told me it was a pleasure to find an AV technician so helpful. She went on to say that it is generally believed AV technicians are arrogant and difficult to work with.  I replied, “Most polymaths are.” 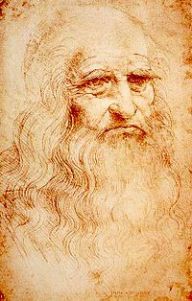 If alive today, he’d be an AV technician

The general perception most people have of audiovisual technicians is warranted. We are haughty and, at times, condescending.  Indeed, we ought to be more careful for the Good Book says “Pride goes before destruction.”

But what would you expect of someone who, having supported events ranging from science to politics and concerts to Super Bowls, had worked hand-in-hand with leading authorities in any given field? The AV technician’s learning spans every subject known to man. The knowledge and expertise that is gained by technicians who sit through conference after conference, listening to the greatest minds on any given topic, goes far beyond what can be attained in university. A seasoned AV pro has the ability to collaborate with nearly any expert or on any subject you can think of.

I was in my early twenties when first realized that I had fallen into an ocean of knowledge. Upon discovering that people were paying $1,200 (plus travel expense) to attend a marketing conference, I thought it would make sense to listen intently and find out what the brouhaha was all about.

Surprise and great pleasure ensued, and upon discovering that from this one event I gained sufficient knowledge to dialogue with other marketing experts with whom I would develop a lasting work relationship in the future.  A marketing director for AT&T told me I was the only AV technician he had ever met who truly understood sports marketing.  Our relationship lasted many years. He hired me to stage events at All Star games, Super Bowls, and the Olympic Games all over the country. In certain circles I became a leading authority on staging sporting events even though, initially, I knew nothing about sports or marketing!

One of my first jobs as a young, twenty-something live event technician was to run TelePrompTer for the Vice President of Marketing at AMC Corporation (in the 1980s it was one of the Big Four car companies before it was purchased by Chrysler).  I did not realize it at the time but the presenter was a real newsmaker.  The night before his grand speech before automotive analysts, Marketingman and I worked late into the evening polishing his speech.  In the course of rewriting the talk he grew weary and developed writers’ block.  Wanting to go to bed, I started making suggestions that eventually crept into his presentation.  The day after the meeting, I was in the resort gift shop when I saw an article in the Wall Street Journal quoting him, using some of the language and ideas I had introduced into his speech.

Only a few year’s back I was the media operations director for The Moody Church in Chicago. It’s a fancy title, but basically I was in charge of audiovisual. One of my responsibilities was to act as travel aide to Dr. Erwin Lutzer. I would go with him to speaking engagements to set up interviews and manage his book table. We were in a North Carolina stadium doing an apologetics conference when a man representing one of the largest religious broadcasting networks in America made it known that he was ready to do Dr. Lutzer’s interview.

“What interview?” I asked.

“The one Erwin promised me before the event!”

“I’m sorry.  Dr. Lutzer already left for the airport.  You’ll have to get someone else.”

Frustrated, Radioman shouted back: “Then you’re doing it.  I’ve already announced to the audience that we would be having an interview with Erwin Lutzer.  Right now, you’re the closest thing we got … and ohhh … one other thing: we go live in two minutes.”

There was not much I could do since I was surrounded by hundreds of people and could not escape. Caught up in excitement, I went on the program and answered the man’s questions the best I could.  When I returned to Chicago, Dr. Lutzer complimented me on a job well done and for representing him accurately on the topic of apologetics.  I am not sure how I could have done otherwise. Having read all his books and heard him speak so many times on a variety of subjects; I knew all of his views thoroughly.  This episode led me, the lowly AV guy, being assigned to answer Dr. Lutzer’s mail and becoming his sounding board on many topics.

It should surprise no one, then, that AV technicians who work in churches know a thing or two about theology.  Spending hours – days rather – editing video and audio clips, hearing sermon after sermon (sometimes three in a single morning) will lead to some of it rubbing off on you.

The etymology of the word “hypocrite” comes from the Greek ὑποκρίτης.  It was originally used as a technical term for a stage actor; the Romans, some say, were the first to regularly apply it to politicians. AV technicians know how to work with both kinds of hypocrites: actors and politicians.

Under the duress and preparation of public speaking people break down and the true inner person is revealed.  The character of The Real Man is not exposed the moment the lights descend upon the talent.  When applause fills the room, he receives it graciously – but this is not The Real Man who “humbly” receives his praise.  The man on stage or on the screen is not real. This is why they call it “show business.”  The genuine man is revealed backstage or during rehearsal, where fears develop.  Experienced AV technicians know how to interact with and comfort The Real Man.

We are unlicensed armchair psychologists who understand conflict resolution, shyness, fear and a host of other human behaviors. Not only that, but we are able to adapt to a variety of scenarios.  One minute we might be giving a pep talk to a dozen stagehands as to why it would benefit them to have our truck unloaded before lunch; the next minute we are negotiating space with the hotel staff.  From there we are off to meeting with a powerful CEO in an attempt to convince her to change the PowerPoint backgrounds from white to blue. AV technicians have learned the art of persuasion in a variety of contexts.

We have more or less mastered herd theory long before Charles Mackay.  AV technicians understand crowd psychology more than anyone else.  We can tell you how a group will respond – in real time!

Headhunters take note: if you want to extract company secrets, don’t recruit their executive team.  Instead you ought to hire their audiovisual technician.

AV technicians were in the next room

My friend Neal Williams knew what the new Corvette would look like before the CEO of General Motors. How? He worked the meeting in which engineers and designers hammered out the plan for the new car. Another friend works at Sandia Labs in New Mexico where national security issues are charted and prepared for action.  While the Osama bin Laden raid was taking place, you can be sure an AV guy was nearby.

When a new product is launched or a press conference is held or the latest scientific research is presented who you gonna call?  An AV company of course.

If I had a dollar for every nondisclosure document I was asked to sign, I could make a down payment on a new truck.

The audiovisual technician’s palate is well trained.  Have you ever seen a skinny AV technician? If you have, he’s new to the business. 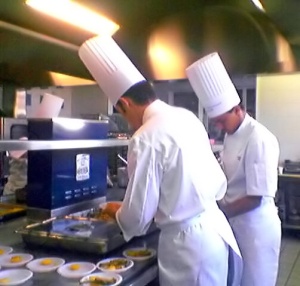 AV technicians are known for their culinary skills

We eat in the finest resorts in the country. Any AV technician can hold his own if engaged in a debate over which Five Star hotel has the best cuisine.

Furthermore, those technicians working on staff at resorts receive free culinary classes simply by paying attention to the chef during site planning and BEO meetings. I recall many tips picked up along the way during my tenure at the Arizona Biltmore, Turnberry Golf Club, and other prestigious resorts.

Equipped with nothing more than a Gerber tool kit, electrical meter, and gaffer’s tape, an experienced audiovisual technician can repair anything in record time. It is often conjectured in taverns around the country that the hit TV show MacGyver is based on the lives of Mike Guy and Randy Will, both highly respected pioneers of the audiovisual staging industry. 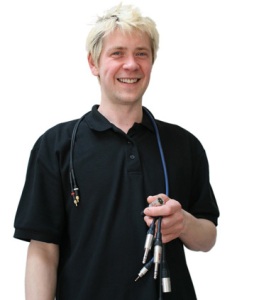 I’m an AV technician. I can do anything

In the 1990s I somehow ended up on the Whitehouse Communications list of vendors.  The Clinton Administration called me to stage events whenever they were in the Southwest. Initially, I provided sound and lighting.  Soon they called me for almost any conceivable thing they needed: barricades, flags, and flowers.  By and large they came to depend on me to solve a wide array of problems.  Once, while working at the Grand Canyon, a strong wind changed directions and blew exhaust fumes from the TV trucks in the direction of the crowd.  The Secret Service asked me to correct the problem.  I wondered out loud, “What? Do you expect me to change the direction of the wind?”  “Sure,” said the lead agent, “You can fix everything else.”

This story reminds me that at the same event the advanceman for the Democratic Party asked me to calculate how many people were attending the event. Members of the Press wanted to report how many people came to hear the President speak. It was a sloping terrace with nooks and turns. I walked the terrain and using the basic formulae to calculate the area of squares, circles, and triangles was able to determine total square footage.  Dividing the total area by two (the area a standing person takes up), I reckoned there were at least 2,500 people at the event – exactly what was reported in the newspapers the following day.  I later asked the DNC advanceman why he asked me to solve the problem.  He joked that “everyone knows AV guys can do anything.” 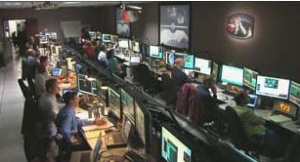 NASA could not function without AV technicians

When the John Glenn orbited the earth in 1962, an AV technician was around to provide technical support for spectators.  Not surprisingly, AV technicians were there to end the Space Shuttle mission, too.

President William McKinley was the first President to use electric media extensively.  His inauguration was the first to be filmed.  Today, Presidents cannot conceive of speaking at an event without first consulting White House Communications Agency (they’re AV technicians).

We’ve seen it all.

One could make a weighty argument that no large public event is even possible without the help and support of the lowly audiovisual technician.

Audiovisual technicians are the last polymaths.  If we did not die an early age due to the stress and rigors of our trade, we would know all things.

The next time you need research help, forget about Google – instead, ask your nearby AV technician.